Does anyone use Nikon anymore? Will you be surprised or no?

daveznspace Posts: 168Member
October 2020 in General Discussions
A week and a half ago I jumped over the mountain and went to the Tetons hoping to see 399 & the quad cubs... of course, they went completely MIA while I was there then came back out after I left lol...

Anyways... as you can imagine there were 7.8 billion photographers there and of course you check out their junk/gear.. w/e and I really don't care but still very observant and were packed in tight at times and a few of the more "famous" ppl were there (one of the main ones was next to me one morning and I told him and I guess a client were there and before I recognized him I told them, no no... you two have to go back on the hill across the road behind us with those telescopes you got

But as the days went along one thing was blatantly clear and that was Nikon overwhelming dominated the gear, kinda blew me away actually. Not only that but not a mirrorless in site, mostly d850's. I'd estimate (at least where I was always at) that the breakdown was 75-80% Nikons and the rest canons.. not a single Sony was seen in 5 days. I actually didn't think this was right so I really looked at ppl's gear.

The morning I shot this sow and cub black bear & all up in my junk (at the crack*ss of dawn) and probably 75 ppl who'd come hoping for moose & every real camera literally was a Nikon, the only exceptions were phones and point n shoots which I didn't pay attention too. I was starting to wonder if the hotel had a mold problem and I was delirious.

Here's mamma bear giving me the "I wonder if he's got candy in his pockets look"... It was still fairly dark with a hint of sun popping up and had to under-expose a few stops So I used my D750 which recovered nicely. 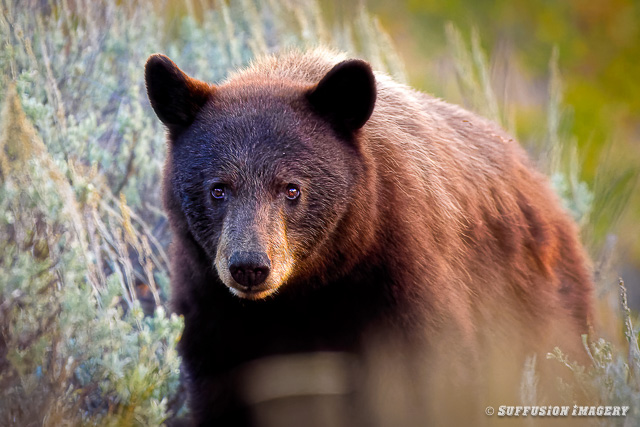 Again, not that it matters but the lack of white lenses or the distinct canon shutter clicks was messing with my mind.

Onward. From my house to the Tetons the shortest route is thru Yellowstone since I the 2nd closest "town, being generous here unless you count Kanya's new compound a town ugggg). On the way to the Tetons I got a tip from a friend that bear 791 had just taken down an elk in the Hayden valley and to get up there but of course I was well beyond the turn but on the way home, we stopped at that circus and thank you lord someone in the front row pulled out in front of us so we didn't have to do the half-day hike from a parking spot to the Woodstock sized crowd.

Now here I couldn't see everyone's gear distinctly but assuming most canons were using 600mm canon lenses (lord only knows how much $$$$$ in gear was there) they were still in the minority but They took some amazing shots that I've seen. And maybe there were a few Sony's but I didn't see them. I have a video walking thru the crowd and you could pretty much tell what was what.

Of course, Bear 791 (who's one of the biggest in the lower 48 states) put on a spectacular show, mesmerizing the crowd at every moment with rage, anger and ok... he just snored a lot lol 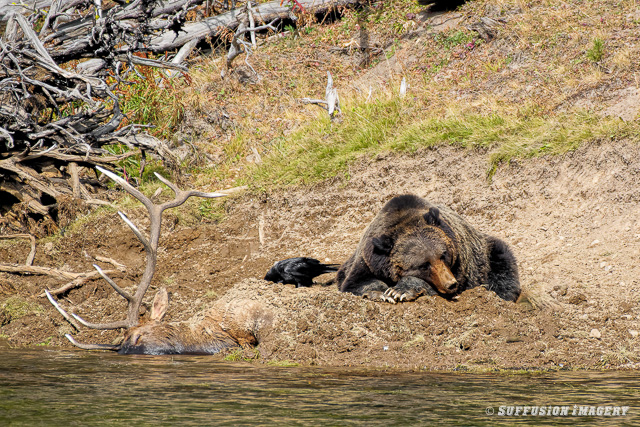 So without fanboying, my takeaway was this: Nikon surely isn't dead. DSLR's surely aren't dead. And Sony... your hype is just that. There were many YouTubers and recognizable faces in the crowd who use sony's on youtube but there they had D6's, D5's, and d850's. So all you bitching about dslr's are dead and/or nikon is dead and/or that sony sells more cameras than churches buy dried breadcrumbs, I got a message for you, these pro's making actually money in this area rely on dslr's to bring home the cash. Someday that'll change but it ain't today

2 more quick things since this short observation became a novel.

1. Before ppl get all pissy, while the info I observed was true as I saw it, This was written in a jest kind of way, not quite sarcastic but in a fun spirit, I'm not knocking anyone except Sony lol but yet it's truthful from my surrounding. Who knows the next crowd through could have been all canons which I don't mind. aka, don't aholes lol.
2. an interesting thing happened to me before I left I bought a slightly used D7100 for a few hundred bucks as a backup to my D750 & D700 but I used it more by far than the others especially with the 200-500MM and religated the D750 to low light. This after I swore I'd never shoot a dx again. I'd recommend to those without tons of funds that use full frame to pick up a used D7100 or D7200 as they can be had for super cheap and you never know. But I did get tired of cameras smashing my hands while they were being carried on tripods so I finally broke down & ordered a gimble this morning. $50 says I'll split my head open with it this winter.

too tired to proofread... so sorry